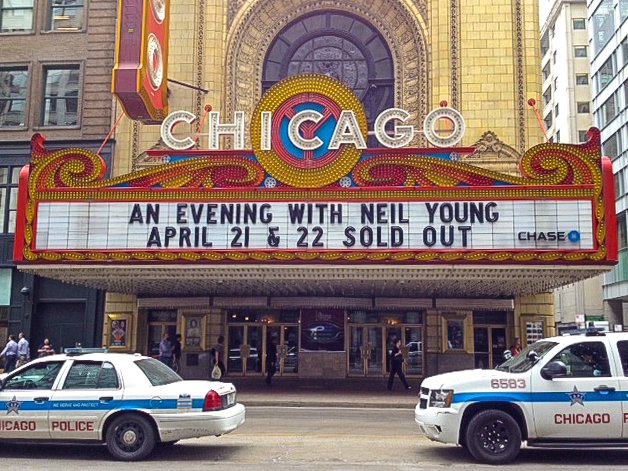 Surrounded by his faithful Wooden Cigar Store Indian, more than half a dozen acoustic guitars, a banjo (Mellow My Mind), a psychedelic grand piano topped with a electronic keyboard (Man Needs a Maid), an upright piano (After the Gold Rush), a pump organ (a bluesy version of Mr. Soul) and more harmonicas then you could shake a stick at, Neil Young kept the Chicago crowd and his scrambling guitar techs guessing what direction he was heading to on the first of two sold out shows Monday night.

Neil dug deep into his early catalog (Only Love Can Break Your Heart, On the Way Home, Harvest & Old Man) but he also performed several numbers written by those who he stated laid the path for his success: the great Phil Ochs, Tim Hardin and fellow Canadian Gordon Lightfoot. The latter, he affectionately referred to as Gordie. Then Neil got sidetracked into a discussion about Gordie Howe the Hall of Fame hockey player for the Detroit Red Wings which whipped the Chicago Black Hawk crowd into a slight frenzy.

Neil confessed that he hadn’t gotten his between-song rap down yet so he did some slight of hand and quickly shifted the subject to the history of one of his guitars. This particular guitar once belonged to Hank Williams, so Neil escaped the hockey penalty box by breaking into Harvest Moon.

Taking a page out of the very young Bob Dylan cannon, Neil opened the second half of his show by treating the audience to his own “Beatnik Poetry.” Some might call it his own mini-version of Dylan’s Last Thoughts on Woody Guthrie, only this could have been composed while Neil took his extremely short intermission. The poet laureate walked out with a grin and told the crowd it was in for a special treat. Without notes he rattled off his sonnet (Hello to Chicago) about The Blues, a girl, her wind swept hair, the Chicago el (elevated train line) and an ornate theatre.

Now, every Rustie needs this recorded show in their Neil Young library and there’s no doubt our good friends at Thrasher’s Wheat can find someone to supply the exact words of his poetic masterpiece.

But enough about poetry. From the vantage point of the rafters where I was sitting for my umpteenth Neil Young show, I couldn’t help but smile that the “Old Man” had done it once again, pulling the rabbit out of the hat like the great magician he is.

His discourses between songs were as classic as the songs themselves. Upon drinking a glass of water he told the audience about the first time he saw a vending machine that sold water. Imagine that: Selling water! At 25 cents a bottle! Unbelievable! Then he went on to say he liked to drink his water out of a glass, not plastic. As he put it, “Glass. Brought to you by Sand and Fire.”

Towards the end of the evening he warned the audience that he was coming to that part in the show when he was going to play his Big Hit so they better pay attention and get ready. Thank God for Neil Young.

Are these the Last Thoughts on Neil Young? Hardly. The dawn will soon be breaking and the second sold-out Chicago show is only hours away.

P.S.: The second Chicago show included an expanded and final version of his poem, Hello to Chicago. As Neil said, he’s no Byron. But then again, Byron was no Neil Young.